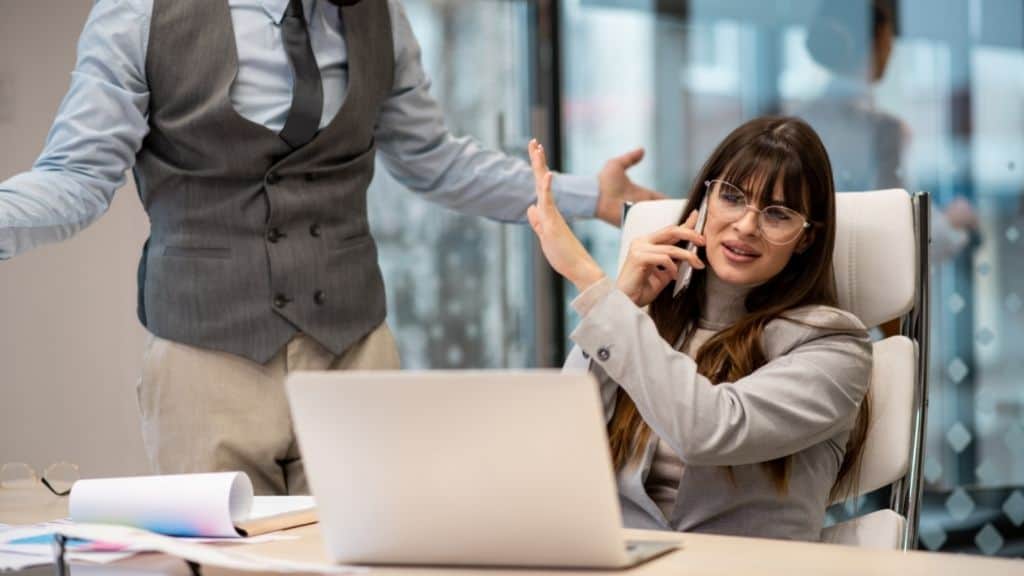 10 Employer Red Flags to Watch Out for EARLY

At present, there is a sizable economic disruption going on, particularly in the US. Many are calling it a labor shortage, while others insist that labor is available and what we’re seeing is caused by a wage shortage.

I’m not going to weigh in on this issue too directly from a political or economic perspective, so cool your jets. What I am going to say though, is that this climate puts the average worker in an unusually strong position.

Seemingly across the board, employers are scrambling for good workers to fill out their organizations. Some are offering higher wages, or new benefits to beat out their competition.

In a culture where it has become normalized to put applicants through 5-6 rounds of interviews (or more!!) for a job, it takes a moment like this one to remind us all that workers have power in the conversation, too (soviet anthem intensifies). It’s not just the job interviewing you. You should also be interviewing the job, to see if it’s worthy of all that you have to offer.

Fun fact: when I wrote that sentence just now, my autocorrect tried to change the phrase “interviewing the job” to “interviewing for the job.” THAT’S how ingrained this is.

You have the power (always, but now more than ever) to be selective in who you sell your time and energy to. When you do, here are some potentially dangerous employer red flags that companies will try to sneak past you, that you can watch out for when making your decisions.

10 Major Employer Red Flags to Watch Out For

Every time I hear this phrase in an orientation session, or from a new manager taking over the team, it makes me want to throw my complimentary paper plate of wholesale club pastries across the room.

Thank you for asking, yes I will tell you why.

This phrase is a lie. If “work hard, play hard” is your personal life philosophy, that’s cool. I’m with it. I’d probably like to hang out with you. But if someone at WORK tells you that everyone who WORKs there is expected to “WORK hard and play hard,” which of those two do you think they’re going to lean on 99% of the time?

It’s a false promise. A trojan horse to disguise an employer’s default state of overworking people behind an imaginary reward of getting to “play hard” after.

Just work when you’re at work. Play on your own time, it’s better.

There are many employers out there (also landlords, law enforcement, babysitters, authority figures of all sorts) who act with what I call Default Resting Animosity.

DRA is a bit tough to quantify. But when it’s there, you know it. You can feel it. These employers don’t set out in good faith to work with you in a way that benefits everyone. Instead, they start from a place of assuming you will be a problem, a necessary discomfort for them to mitigate. If you’re unsure if your employer has DRA, try asking yourself this question:

Are they trying to succeed because of you, or in spite of you?

It may seem like a small difference, but it is one that can seep into every aspect of a job. From compensation to quality of life, growth opportunities, and how strictly they try to control your day-to-day work. It all hinges on the attitude of the organization. Are they treating you as a member of the team, or as a cost to be minimized?

If there’s one thing terrible employers love, it’s cheap half-measures to make you feel like you’re being compensated better than you actually are.

For example, one-time signing bonuses have become a popular way to disguise a refusal to pay people better. Certain fast food restaurants, amid the hiring challenges, have recently started offering cell phones for new employees after their first six months. And when you break it down, all that amounts to is a (temporary) raise of just pennies per hour.

The same applies to ice cream Fridays, gift cards for coffee, weekly happy hours, and about a million others.

There’s nothing inherently bad about any of these things, and they can be great icing on the cake of a good job. But too often, an employer will try to give you an elaborate display of icing, hoping you won’t notice the complete lack of cake underneath.

The people around you, generally, are rational. Therefore, if you see lots of coworkers quitting, and positions staying vacant, there’s probably good reason for it. Where there’s smoke, there’s usually fire.

There are some rare cases where high employee turnover makes sense. But usually, it’s a big whopping employer red flag. What is causing people to quit or making it so hard to fill open positions? Why are people in a similar position to you leaving, and where are they going instead?

Attrition is normal, and the exchange of old staff for new spells growth for both companies and people. But if it seems like everyone around you is running for the hills, there are probably good reasons, and it’s only a matter of time before you see them for yourself.

Just like #2 above, bait and switching is something you can usually spot right away, that rarely gets better after a first impression. Bait and switching is a trait of toxic organizations that like to offer you one thing, and then hope you won’t complain when they give you something else. It will usually be made to seem accidental, but it rarely is. A few examples:

If you find yourself on the receiving end of a bait and switch either while applying, or shortly after starting a job, it likely will not be the last one. It is more often a cultural trait than a fluke.

Every employer will (presumably) say yes to certain requests/demands from its employees, and no to others. But on those occasions when they do say no, how they do it matters a lot.

For example, asking for a raise. Let’s say you ask for a raise, and the employer turns it down. How do they do it? If they tell you that you just haven’t made a convincing enough case, then you can have a conversation about next steps. They also might agree that you have earned it but the company can’t afford it right now (careful here too, see #7).

In both of those cases, the company is saying no, but they are not punishing you for asking.

Too often when you make a request, employers will try to bully you, or make you feel guilty, or use other tactics to discourage you from advocating for yourself in the future. This is not a good sign. You should always be allowed to ask and get a straight answer, even if it’s a no.

When negotiating for more money, pretty much every employer will want you to feel like you’re taking away their very last dollar. But it almost never is.

On some level, I sympathize. After all, a business’ job is to make a profit. And especially for a small or young business, that can be hard. I’m not trying to step all over that. But paying your employees less than they’re worth is not a valid solution.

You can usually take a look around and get a pretty good idea of whether there’s enough to go around. If they can afford big company parties, needless cosmetic perks (see #3 above), massive ad campaigns, and retreats for your boss, then they can afford you.

Unlike some of the other employer red flags on this list, this is one that you’ll probably first see at a bit of a distance before you experience it directly.

Watch out when you see multiple people dodging responsibility for difficult things, or pointing fingers when things go wrong. While these can be shady character traits of an individual, they are also highly infectious when they become company culture. You want leaders and team members alike who are ready to take responsibility for their work.

Personal responsibility is everything when it comes to teamwork of any scale.

I’m not a lawyer, but I do know this: employment contracts should generally be short, simple, and easy to follow.

Obviously this will vary by industry, job function, liability, compensation structure, and a thousand other things. But if a company is asking you to sign some sprawling contract full of confusing language, you owe it to yourself to consider why that is and whether it makes sense for it to be that way.

Most jobs can be described in a way that legally protects both parties, in just a few pages of human-readable language. So if you find yourself staring down an 80-page desk slammer, you ought to ask why. Are there specifics of this job that make extra legal caution necessary? Or, are they trying to hide some shady stuff in there?

I once negotiated my way up to the CFO of a company I worked for over a predatory clawback clause. It was buried on like page 47 of a stock option contract they were offering me, in the hopes no one would see it. The CFO still refused to budge on it, and that was one of several red flags that ultimately drove me to hand in my notice not long after.

There was this company. I was considering applying for an internship there, and so I went on a tour with a number of other students. I don’t even remember the name of the place. What I do remember is something the founder said to us while we were on the tour:

“You will not see a foosball table in this office. You will not see nerf guns, beer taps, or any of those other things that you expect to see at a fun startup office. Those things are meant to keep you in the office longer. They put those things there to keep you away from your family longer, thinking you’re having fun, while really just keeping you at work, thinking about work. We don’t want to do that to you. We want you to come here, work, and go home.”

At the time, I thought the guy seemed like kind of a tool. He probably was. But he had a point, didn’t he?

If 15 minutes of ping pong with your coworker Mike is a refreshing break that helps you recharge, that’s great. But watch out, because fun and games like these are a sneaky cosmetic perk (see #3) that can keep you at work longer, feeling like you’re having a good time (see #1), when you could be finishing up and getting back to the rest of your life a lot sooner.

What are the employer red flags that you watch out for? Share below!