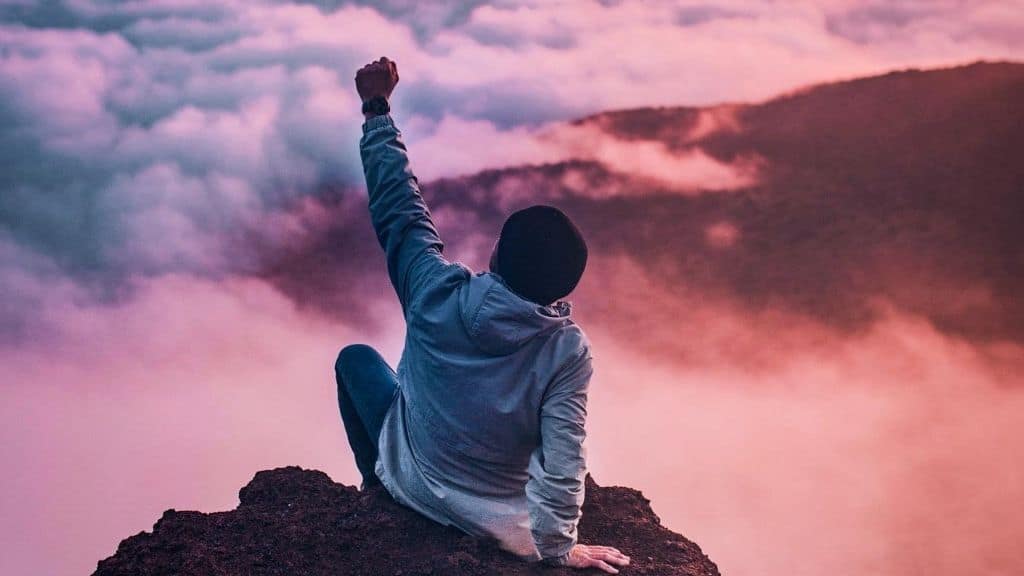 In a recent post, I explored the myth of the supposed prodigies we so often see in pop culture. I argued that instead of disproportionately celebrating the natural talent of our idols, we should try to emulate the effort they put in. Let’s add a new layer to that. Let’s look beyond consistency and effort, and into the deep personal evolution that becomes necessary when life refuses to get out of the way.

To be fair, there are plenty of strong counter-examples to the “prodigy”-type characters who we see simply showing up and being the best. Sports movies, for instance, are great at showcasing underdogs who give it their all to become champions through sweat, hard work, and grit.

No one ever said winning had to be reasonable.

Despite all those signs, there’s always another voice inside you. Sometimes it’s quiet, even deafeningly so, but it’s always there. It’s the voice that says, “I’m not done yet.“

If you’re already putting in the sweat, hard work, and grit, and life still keeps stepping on you time and again, here are four principles for personal evolution that will help you figure out how to push past your limits and crush the obstacles in your way.

1. This Isn’t Your Final Form

Let’s try something different, something weird. Let’s talk about anime.

Whether you’ve consumed hundreds of hours of anime, or never watched a single episode, it’s all good. But either way, please take this walk with me.

Let’s step through a typical anime “big showdown”. For context, we could be talking about a physical fight here, or a sport, some sort of battle of wits, or even baking. So picture it however you like. All that matters is that we have a Hero with a goal he has worked toward his whole life, and a Villain who wants to bring it all crashing down.

At any rate, Villain shows up, malicious and impossibly powerful, and no one can stop her.

Until, of course, our Hero arrives on the scene. He heroically wields his hard-earned strength and skill with 110% effort, turns the tide and puts Villain in her place.

Until, of course, we learn that Villain has in some way had one hand tied behind her back the whole time. She wasn’t even really trying yet. She’s finally ready to demonstrate her true strength.

Hero was already giving it his all, and now all hope is lost.

Until, of course, it happens: The Change. The moment where Hero realizes that who he has been cannot win this, and the only way to succeed is to push past his limits and become who he is going to be, right here and now.

This sisyphean cycle has been known to repeat up to a couple more times, but the outcome is inevitable: eventually the monster has no cards left to play. The Hero, solely on merit of being too stubborn to give up, wins. Clothes tattered, body bruised, flour all used up, he walks away stronger than ever before.

2. Don’t Settle for Your Limits

Keep that anime mindset fresh as we shift to a real-world parallel with (unfortunately) no magic fireballs or monsters from outer space.

Personal trainers understand the mechanics of personal evolution as well as anyone.

When it comes to improving physical fitness, pushing your limits is the name of the game. The main reason that exercise and physical training make us harder, better, faster, and stronger is a principle called progressive overload.

Your body is a reflection of what you ask it to do on a regular basis.

If you remain sedentary and don’t use your muscles much, they will slowly deteriorate, or atrophy. By not using them, you’re telling your body that these muscles aren’t really necessary. If you don’t need those muscles, your body adapts so it doesn’t have to carry them around all the time for nothing.

But on the other hand, if you exercise and challenge your body consistently, things move in the other direction. Good workouts challenge, or “overload” your muscles. In the short term, you’re exhausted and sore. This sends the message to your body that what you’ve got isn’t cutting it. So when those muscles heal, they come back stronger and more ready for next time.

This is progressive overload in action. You exercise to “overload” your muscles. They react by healing and growing stronger. That’s where the “progressive,” or “progress” part comes in. Stack up enough of those incremental gains, and you’re living the life of an athlete.

Remember that as a human, you are adaptable. You are capable of ongoing growth. You are an infinitely capable machine.

3. The Simple Joy of Challenge

Progressive overload is usually only used as a term in the context of physical fitness, but the same basic principle applies all over the place: cognition, willpower, emotional capacity, and just about every other part of you.

The more time you spend at the edge of your limits, the more those limits will grow. Challenges are, rather than loathsome roadblocks, the necessary milestones of progress.

Babies aren’t born ready for multivariable calculus. They have to learn to speak first. Then you can teach them how to count things, and after that how to put two numbers together to make a bigger number. At each of these stages, the child is pushing past their limits.

It takes years of this mental progressive overload to get to the point where calculus is even possible. This is part of why babies who take calculus always appear so much taller and better spoken than other babies. The more you know…

Another way to think of progressive overload is as part of your discomfort zone. That is, by pushing yourself beyond what is comfortable and easy, you can grow your potential and continue to dive deeper into all life has to offer.

If you want to grow and experience real personal evolution, you need to push past your limits and stretch yourself into new spaces. Just like with physical training, you’ll be sore at first, but you will heal into a stronger self. Challenge yourself and feel the joy of this growth.

Pushing past your limits and reaching new heights is not just about where it gets you; The simple joy of challenge is a reward in its own right.

4. Personal Evolution is a Journey, not AND a Destination

So the key to personal growth is to take the hard moments where you want to run away, and double down – dig into those moments even harder. And this is the part where I tell you not to worry, and that it’s not bad as it sounds.

Don’t worry, it’s not as bad as it sounds. See? I told you it was that part.

But here’s the real business. Pursuing challenge down the road to evolving and growing as an individual can be enjoyable for its own sake, regardless of where you end up. And it’s all thanks to a phenomenon called flow.

In all my time researching psychology and how the funky, wonky human brain works, I’ve found few ideas quite as exciting as the concept of flow.

Originally coined by Mihály Csíkszentmihályi in his awesome book, Flow, the idea is basically this: the relationship between the difficulty of an activity and your skill level in that activity is a huge driver of not only how successful you’ll be, but how happy you’ll feel doing that activity.

When the difficulty is too high for your skill level, it leads to anxious feelings. And when your skill level is far above what’s needed, you’ll quickly lose interest. But the goldilocks zone in between is an extraordinary place.

Where a significant challenge meets an appropriate level of skill, a “flow state” becomes possible. Perhaps more familiar as being “in the zone”, flow is a state of intense focus where great and fulfilling work is possible.

In a flow state, you feel a strong sense of excitement and purpose, which creates a feeling of joy. Your brain is so heavily engaged in the present moment that it literally distorts your perception of time. The experience can be like a drug (don’t worry, it’s one of the good ones).

I like to think of the experience of flow as a reward. It’s your brain giving you an intense jolt of good feelings when you’re in exactly the right place. Challenges drive you toward personal evolution, and your brain knows it.

Personal Evolution isn’t Easy, but it’s What You Need

Heroes in anime stories often have supernatural abilities, like some sort of magic, or fighting powers, or abnormally warm hands for baking perfect bread. But their real superpower is the ability to rise to impossible challenges, and then rise once more when things get darker still, and rise YET AGAIN once all hope seems lost. And unlike magic lasers or special bread-hands, that power is in reach for all of us – there for the taking.

Personal evolution is a lot to ask of yourself. Pushing past your limits often isn’t easy; indeed, being pushed to your limits in the first place was probably no walk in the park. But you can do it. And you’ll be glad you did.

If 2020 has taught us anything, it’s that life will almost certainly continue innovating on the challenges it throws at us. The only answer, then, is to keep evolving yourself in kind, and keep rising to face each new and improved challenge as a new and improved you.

This isn’t your final form. You’re not done yet. Push past your limits. Plus ultra!

2 thoughts on “Personal Evolution: 4 Principles for Pushing Past Your Limits”